D: And so it was, on a lovely day in the month of August – named as such for that rat, Augustus Caesar – did Michael S. Fedison, author of The Eye-Dancers, bequeath to A the winning gift card. Stunned and overcome by this beneficence, A requested the honor of allowing yours truly to interview him.

A: First of all, wordy. Second, what’s your beef with Augustus?

D: Who is asking the questions, here, woman?

D: And without further ado, The Druid Asks the Questions

An interview with Michael S. Fedison.

D: Give those who may not know your book a quick snapshot: 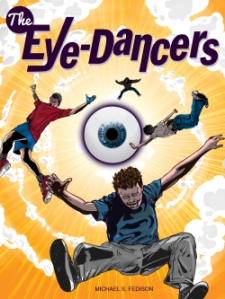 M: Have you ever had a recurring nightmare?  The kind of dream that repeats itself, night after night, after night?  That’s what seventh-grader Mitchell Brant experiences at the beginning of The Eye-Dancers.  A mysterious little girl with blue, spinning, hypnotic eyes comes to him in his dreams, three nights in a row.  He is convinced she is trying to snare him and transport him to whatever world she calls home.

When Mitchell learns that two of his friends are having the same dream, things really start to get weird.  The boys then go to the class genius, Marc Kuslanski, for advice.  But the very next night, as Mitchell feared, the boys are indeed whisked away to a strange, new world.  What follows is a dimension-busting adventure that will severely test each of the boys, forcing them not only to confront the dangers of the new world they find themselves in, but also to face down and overcome their own inner struggles and insecurities.

D: How did you meet your characters? Were you introduced, did they demand your attention in some innocuous place, or have you known them so long that you can no longer remember life without them?

M: Definitely the latter!  The characters in The Eye-Dancers are inspired by childhood friends I grew up with.  So, yes, absolutely.  I have known them all my life!  And it was a lot of fun “fictionalizing” them and writing about them.

D: And I reckon you honor your friends in that – it was many a man who vied to have the chance to be immortalized in my words.

D: Which of your characters can you identify with the most?

M: Without question, Mitchell Brant.  He and I share many similarities.  For example, when I was in middle school, I, like Mitchell, had an overactive imagination, loved collectible old comic books, and was very shy around girls.  There is no doubt that Mitchell and I are, in many ways, as Anne Shirley might say, “kindred spirits.”

D: Do you have a least favorite character – one that you almost enjoy watching cope with any disasters you as author send his or her way?

M: Honestly, no.  I liked all the main characters, and there weren’t any of the supporting characters I hated either.  “Grronk,” who we meet in chapter four, is incredibly obnoxious, but he was very fun to write for.

D: Mmm, you could teach A some pointers. If only she had the same outlook. . .

D: If you were in the same situation as your characters, what would you do differently (without giving too much away)?

M: Hmm, that’s an interesting question, and I’m not sure if I would do anything all that differently, especially if I were twelve years old, as they are.  Even though I relate more to Mitchell than the others, I would probably have chosen the Marc Kuslanski method—trying to gather as much data as possible about their new surroundings.  But really, I can see myself incorporating each of the boys’ strategies.  That’s what’s fun about being a writer.  You can write about multiple characters, and, in one way or another, each character has a piece of yourself in them.  Kind of like make-believe multiple-personality disorder, I suppose . . .

D: Oh yes – A can commiserate. Although in her case, I’m almost certain she’d lean less towards make-believe—

A: D, behave yourself.

D: What makes you uniquely qualified to write The Eye Dancers?

M: Well, the first thing is the characters—the fact that they are based on friends I knew personally, and grew up with.  Apart from that, the themes and concepts of the story have always interested me and resonated with me.  Some of the novel’s themes are:  the magic of childhood, and the enduring, transformative quality of friendships formed early in life; quantum physics and the idea of parallel worlds; a fascination with nostalgia, especially the 1950s; and the interconnectedness of all things—the fact that a stranger, so far away you can’t even imagine, can, in some mysterious, unexplainable way, be connected to you in a very real and powerful way.

D: You love The Twilight Zone – tell us why.

M: The Twilight Zone is really a unique TV show—the quality of the writing is unsurpassed, I think, in television history.  I love the way so many of the stories probe beneath the surface.  The stories, in and of themselves, are entertaining, sometimes scary, but, even more important, The Twilight Zone at its best forces us to look at our world, and at ourselves, and examine what we see.

D: Your story tackles how we perceive reality: if you could perceive it in any way and have it be true for you, what would you choose to perceive?

M: I think the number-one thing I would like to see is a world where people are not so quick to judge and impose their opinions on things they don’t understand.  One of the themes of The Eye-Dancers I failed to mention above is the idea that “there is more in heaven and earth than is dreamt of in [our] philosophy.”  This is a lesson Marc Kuslanski needs to learn over the course of the story.  And it’s a lesson we all need to learn, at one time or another, I think.

D: Any more trips amid the fantastic planned (i.e. books in the works)?

M: I actually have begun a sequel to The Eye-Dancers!  It is in the very early stages (not even titled yet), but I am optimistic about it.  Five years have passed, and the sequel shows the main characters now at age seventeen—which certainly gives the book a different feel from The Eye-Dancers.

D: Finally, if a time-travelling Druid made his home in your imagination, would you flog him publicly, or make him welcome and treat him with the respect he deserves?

M: I would praise him, share his genius with the world, climb up old fire escapes to city rooftops and shout his name so everyone on the street below could hear!  I would ask his opinion on all things.  D, somehow, I think you were fishing for a compliment with this question!  Well, it worked!  You are marvelous, D!

A: Seriously?! I’m sorry, Mike. That was unnecessary, and you’re a dear for answering him.

M: And thanks so much, D and Katie, for taking the time to interview me and for asking such great questions!  I really appreciate it!

D: And so concludes my first entirely self-directed interview. My sincere thank you to Mike for not only agreeing to be interviewed, but for writing such a captivating book.

Read more about The Eye-Dancers, including purchasing information. You won’t regret it.

23 thoughts on “The Druid asks the Questions – Michael S. Fedison”