A: So, I’m a huge fan of Papi Z’s prompts. For some reason, he picks words out of the sky and my fevered brain just cooks up something – or wants to cook up something. There wasn’t a prompt last week, but I did have a half-finished story, prompted waaay back on Feb 3. I never got around to finishing it, until this weekend . . .

D: And by this weekend, she means five minutes ago.

A: Yeah, well, I thought it was finished. 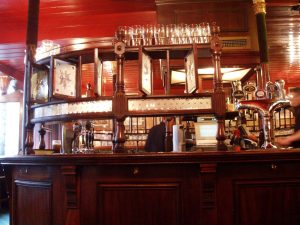 “So I says to her, I says, ‘hey, dame, the non-sparkling Vampires walked into the room—‘“

“And what did she say, Jimmy?”

“I’m getting to that, you goon. I says, ‘the non-sparking Vampires walked into the room—‘“

“Why weren’t they sparkling? Everyone knows Vampires sparkle.”

The bar was still. Even Harry, pulling what was usually a beautiful pint of Guinness (damn near had to go to school just to get the right to do that in McCreary’s Pub), let the stout dribble over his fingers.

It had started way back in ‘58, when everyone discovered the things that went bump in the night were real. Vampires existed – Werewolves too, though they weren’t shifters like Grandpappy’s stories said. No, they were just big, mean sumabitches the Vamps trained to take down the unwary.

For twenty years, we fought the bastards – and for twenty years we kept them at bay. Until some poor shmuck found old film footage from before – before the night fell on us, dripping blood. Now, the blood-suckers are winning – if only because they managed to get us to fight each other.

Whoever thought of imitating that footage – painting themselves in that teeny-bopper glitter and shining a light – was one smart son-of-a-bastard. Sparkle-lovers insisted Vamps were our friends, like they had gone vegetarian or something. Right, because fake-bacon is so fabulous when you have a ton of thick, mouthwatering strips of Ms. Piggy flinging themselves at you.

Harry was staring at me through the taps. His ruined Guinness sat on the edge of the bar – a sad victim of the runt’s ill-chosen words. It just didn’t make sense. Sparkle-lover was a newbie, a runt fresh out of Strix. He’d had so much promise.

With a shrug, I nodded to the man in charge. Harry took Sparkle-lover by the scruff and hauled him to the back with me close behind. Nobody in McCreary’s was a sparkle-lover, but it was just best to do these kinds of things behind closed doors – ya know what I mean?

“What’s up?” Harry shoved the kid against a row of metal filing cabinets. “Just what do you think is up? We don’t take kindly to sparkle-talk, boy.”

“Explain what? You rolled outta Strix and came in here talking about damned sparkling vamps. All I gotta think is that you’re either sick in the head or lookin’ to get staked.”

Harry was shaking the runt hard but the kid pulled free from the big man’s grip and shoved his sweaty face at me.

“No, look – Jimmy, you gotta believe me. I said that so you’d get me outta there. Yeah, I rolled out of Strix, just like every other hunter, and I was good, too. But the Vamps got to me as I came out – it’s my sister, Jimmy. They got my sister.”

“What do you mean? You said that so–they gotta mick on you?”

“Yeah, but I killed the bug – changed it, like – before you started tellin’ your jokes.” He flashed us the mangled bit of pin on his lapel. It winked at us in the dim light. I reached for it.

I looked between the runt and Harry. Could we even trust this guy?

“It’s your warehouse. They wanted me on the inside to gain access to it.”

“They know about the warehouse?” The dread was burnin’ holes in my gut.

“Don’t listen to him, Jimmy. He don’t know squat. Get him out of here.”

I grabbed the runt by the scruff but he struggled. “Jimmy – no! They’ll kill her! You gotta help me.” 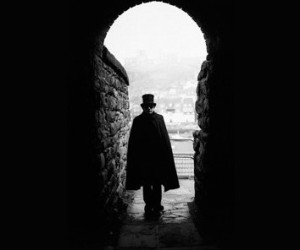 Harry was growling but I could tell by his eyes that he was planning something. That ruined pint still rankled, but word was, the runt’s sister was just a little bit of a thing.

“Take him outside, Jimmy – rough him up, but not too much. Let those damn vamps know we’re not going to be had that easy. We don’t just let any trash walk in here.”

I did as I was told, but I gave the runt a hand sign. Anyone who’s been through Strix knows it. We’d help him get his sister.

Donny Corrigan let Jimmy Malone smash his fist into his face a couple of times and then walked away from McCreary’s with a smile.

“It’s done,” he whispered into the lapel of his jacket as he walked around the corner. “We’ll get into the warehouse – no, leave the humans to me. You take the vamps.”