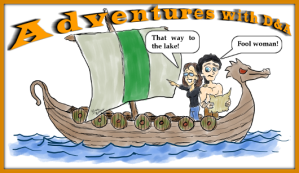 D: So, um, A, are you aware that you are over at Readful Things, talking to yourself?

D: Of course, you’re calling it a “Mirror Interview,” but the fact remains: you’re talking to yourself.

D: Just so we’re both on the same page here.

A: (Eyeroll). Right. Anyway, go check out the Mirror Interview that Ionia was so very kind to allow me to do on her blog space (and Charles was so kind as to post)!

Give those who may not know Changelings: Into the Mist a snapshot of the story.

Irish teens Maureen O’Malley and Sean McAndrew are lost to time. Lured from the abbey they call home by the vision of a warrior shadowed by mist, they are tossed between pirates led by Grace O’Malley in 1584 and revolutionaries dreaming of a new republic in 1916 Dublin. To return home, they must defeat the man – the myth – responsible for their misadventures: the tyrannical Faerie king, Nuada Silver Arm. Maureen and Sean are the strongest Changelings in one thousand years, and the king would rather the last of the descendants of Man and Fae remain lost to time forever. Aiding them is the man in…