Every Friday, for the rest of the year (and then some – there are actually 55 chapters in Changelings), I am presenting the first page of each sequential chapter in the book – but the real fun comes after the chapter, with behind-the-scenes goodies, historical footnotes and a bit of dialogue with a certain Druid. Enjoy it as a stand-alone treat or read along with your very own copy of Changelings. Check out Chapter One and follow along! 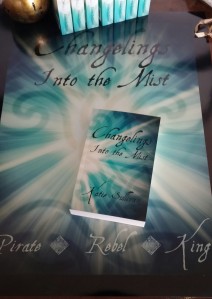 Maureen clasped two identical boxes beneath her arms as she slipped into the boarding school common room. She shot a bright smile at Sr. Theresa, but the woman barely acknowledged it. She was sitting comfortably in the corner with a dog-eared James Stephens novel. It was a hard-won indulgence in the nun’s otherwise austere life, and Maureen knew she would be a complacent chaperone for the abbey’s only summer residents.

Sean was perched on a chair in the opposite corner, reading a comic book – another indulgence. As soon as he saw her, he leapt to his feet. Brightly coloured pages fluttered to the floor.

She curtseyed. “Here I am.”

They always met in the common room on Sunday evenings, after chores were completed and supper eaten. Sean always finished first, but tonight she had not been delayed by some creative punishment. She shifted her cargo and grabbed his comic. He would be annoyed later if he’d left it there.

He squinted at her and then eyed the prize in her arms. “Oi, those are—”

The squint turned into an arched eyebrow. “But mine was in my room.”

“And I went to the liberty of getting it for you.” She tried to sound nonchalant as she deposited said boxes on the low table in the middle of the room. It was not the first time she had collected them – she knew where to look.

“I wasn’t aware I wanted it.” He ran his hands through his short, jet-black hair and laced his fingers behind his neck. The arched eyebrow was firmly in place.

“You did. You want to help me find the man.” She stopped and clenched her hands. She had no idea what he had actually seen during mass, and she found herself not wanting to say too much. If Sean had not seen—

D: If Sean had not seen what? My brilliance? Of course he saw. He was stunned by it, overawed, and if Maureen were paying any attention to him, she would have noticed.

A: Could you not revel in spoilers, D?

D: She takes the boy for granted, A, and you know it.

A: Oh, and picking up his comic when it fell to the floor was taking him for granted?

D: But of course Ireland, A – it’s a land full of mystics and seers.

A: (Eye roll) Just the same, visions in church are grounds for the asylum.

A: Or candidacy for the priesthood for Sean–

D: Surely you’re reading far too much into this, A.

A: Or the nunnery for Maureen.

D: As bad as you going into the nunnery. Talk about nightmare–

A: Oi, Druid! That is quite enough of that!

A: I’m pretty certain there’s going to be a list of things to apologize for before we’re done.

D: And now who is reveling in spoilers? Hm? Don’t you have historical footnotes and other flotsam with which to delight and entertain?

Supper: Often used now interchangeably with dinner, in Ireland and the UK, supper was/is often described as a light repast later in the evening (i.e.: slice of buttered bread and water at 10 pm). Dinner is the midday meal, and was often much heavier, especially on Sundays. Of course, to complicate things, in Ireland ‘supper’ was sometimes used interchangeably with ‘tea,’ especially if that light meal, eaten at 6 pm, had some added accoutrements…sigh.

Regardless, I found ‘supper’ sounded more Irish to my Midwestern American ears, and while I could have used ‘tea,’ many American readers may not have known that tea is a meal as well as a beverage akin to the lifeblood of most Irish men and women.

James Stephens (1880-1950) was an Irish novelist and poet. Sr. Theresa’s ‘dog-eared’ novel in question is In the Land of Youth, a direct reference to Tír na nÓg. Despite being a Benedictine nun, Sr. Theresa is a believer in – and lover of – faerie stories (or, the Good Folk, as she calls them) and often shared that love with Maureen and Sean.

James Stephens also wrote Insurrection in Dublin, in reference to the 1916 Rising, as well as numerous other retellings of Irish fairy tales. While researching just who Sr. Theresa should be reading, stumbling upon James Stephens’ name was kismet. Given his writings, and given Sr. Theresa’s stubborn refusal to give up this one ‘indulgence,’ may indicate Sr. Theresa has a greater roll to play in the lives of the Changelings.

But of course, you’ll have to wait until Book Two, The Coming Storm to find out.

Bonus: Maureen’s punishments often include peeling potatoes in the kitchen, polishing the silver or, if she’s been really bold, embroidery.

The main difference between Carrickahowley and most other church-run boarding schools is that it is co-ed. One could argue that there were two different schools housed on the grounds but in my vision of the school, that is not the case (and in case you’re wondering, Carrickahowley

looks more like a squat version of Glenstal Abbey School than it does Kylmore – especially since they were built around the same time). However, proprieties have been observed and Carrickahowley has separate dormitories – even if Maureen insists on stealing into the boy’s dormitory to fetch Sean’s orphan box.

Enjoying First Fridays so far? Don’t forget, if you haven’t already – grab your very own copy of Changelings, available as an ebook or paperback, from Amazon!