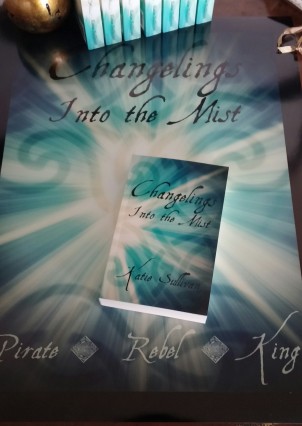 D: What was that?

A: Nothing. You were saying?

D: . . . Yes, well, I was thinking perhaps we could skip this chapter.

D: Oh, there are far better chapters than this in the book. Take Chapter 19 for instance. That one was brilliant.

A: Well, thanks – but we’re going to get there eventually. Right now, we’re on Chapter 3.

A: Are you pouting?

A: Don’t pout. It will give you wrinkles.

A: (Sigh) Now who’s pedantic?  Stop stalling. We’re reviewing and titbit-ing and footnoting chapter three – and you will enjoy it. Got it?

A: Stop lisping and pretending to have a hunched back.

A: (Eye roll). Anyway, If you’re new to the First Friday feature, check out Chapter 1 and Chapter 2, and don’t forget to pick up your own copy of Changelings so you can follow along!

Maureen’s green eyes glowed in the half-light as she sailed out of the kitchen doorway. Sean followed, feeling slightly sick. He listened to the night, and found himself holding his breath. He was waiting for an alarm to sound – an alarm he knew in his gut would never be raised. After his earlier daring, he did not know what to say. This had been his idea, but it was her show. What happened next was all on her.

The fieldstone church was separate from the rest of the abbey, and built at the top of a hill that commanded views of the surrounding countryside. It was a short trek, and they walked in companionable silence. As they crested the hill, the newly risen moon came out from behind low clouds. Its light threw into stark relief a circle of young oaks that would, one day, tower over the little building. Their branches strained towards the sky, and the moon painted them in silver.

It was eerie and beautiful, and not quite of this world.

He shook himself and reminded himself why they were here. This was no time to allow the power of the morning’s vision to carry him away. He looked around for his friend.

The heavy oak door, the gateway to the church, opened with a grating sigh of wood and age. Panic seized his chest. He nearly bolted until he realized it was only Maureen, opening the door. He wondered where she had gotten the key – or if she had a key at all.

He shook his head. Some things were better left unknown.

She motioned him inside with a jerk of her chin and closed the door behind him. He waited for her to lock it again, hesitant to step foot into the nave without her. She touched his shoulder lightly as she passed him.

“What are we hoping to find in here?” he asked. His voice bounced off the stones and he winced.

D: What was Maureen hoping to find in there?

A: You know exactly what she was hoping to find. And you know that not finding it (or you, as it happens) is exactly what precipitates the rest of the story. Of course, your particular role in Maureen and Sean’s adventures is why you didn’t want to review Chapter Three. . .

A: You’re a character in my head, D. Of course you’re obvious.

D: Now. There was a time when you had no idea what I was on about. Years, in fact.

Nave: The nave is the central part of a church building, intended to accommodate most of the congregation. In traditional Western churches it is rectangular, separated from the chancel (the space around the altar in the sanctuary) by a step or rail, and from adjacent aisles by pillars (ref: Wikipedia).

Technically, the nave extends from the entrance to the chancel, but I separated them slightly as the entrance is also called the vestibule, and I wanted to indicate that while Sean was inside, he was waiting for Maureen to set foot in the church proper. Plus, so many different words… it’s supper/dinner/lunch/tea all over again!

Readers may note that Maureen and Sean had to trek to the church, which should not have happened in a traditional abbey – those are generally self-contained structures, with everything – from kitchens, bedrooms, churches, dungeons (kidding!) – linked together. Not so at the fictional Carrickahowley Abbey, where the convent and school are at the base of the hill, while the small chapel commands the top. This was done for two reasons: 1) Sean and Maureen did not start out as orphans and the church was just a community church. Frankly, time travel is easier without parents around, so the elder O’Malleys and McAndrews had to be written out of the story, and the church was changed into the Abbey chapel – but in my head, the church was still all by itself at the top of the hill. Why?

Enter reason No. 2): there have been monuments to some sort of god on the top of that hill since man acknowledged such things – from Dubh’s hermitage to a small chapel of nuns. The lonely chapel is an homage to the mysticism of the hill. The chapel exists by itself, as though home to a power separate from any religious community – old, new, pagan or monotheistic.

In Part One, the moon – and its phases – features heavily. Not only was the moon a reliable timekeeper, in the generalized ‘Old Religion’ at use within the pages of Changelings the moon is a powerful magical gatekeeper – but only if used correctly. Dubh, being – as he says – over 1300 years-old, is well versed in the old magics. Maureen and Sean, born in 1943, are not.

Because the moon is used so specifically, I took pains to ensure I had the correct phases for the day/week/month as described in the book, which meant more than a little research to discover not only the phase of the moon, but also the sign. I finally found an online tool to help me – and once I knew that on August 31, 1958 the moon was three days past full, in Aries, I had an approximate date for when they could potentially return home (Feb 14, 1585 – when the full moon was in the opposite sign, Virgo), thus setting up the pacing and timetable for Parts One and Two.

I was very lucky that the tool I found was able to help me with the mundane timekeeping function of the moon as well. Listed on each day is a sun-and-moon rise-and-set time, which helped enormously. There were more than a few times where I would reference the moon only to realize it had not even risen in the sky yet – or, had set hours before.

Enjoying First Fridays so far? Don’t forget, if you haven’t already, grab your very own copy of Changelings, available as an ebook or paperback, from Amazon!