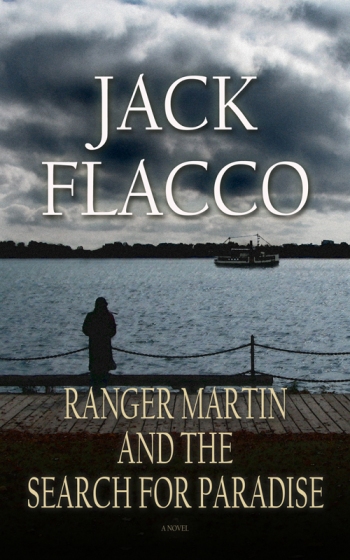 Ranger has lost none of his spunk, his grit, or his genuine desire to guide his young charges through the wasteland America has become following the wake of the zombie – or my favorite moniker from the book, chewer – apocalypse. He remains a top contender for my zombie apocalypse team, and the series featuring his adventures has a cherished spot on my shelf.

Ranger’s final chapter starts with a punch to the gut and never lets the reader rest until that final, bittersweet page. Along the way, characters we grew to love over the course of the series, face challenges that would test the mettle of any good man or woman. And a good man is what Ranger is – but even good men make mistakes, and for me, the question of trust, in the face of utter devastation, was what really turned the pages in Search for Paradise.

As always, Ranger’s story is tight, keeps its sense of humor, and never lets the reader forget that death is a snap of the teeth away. At this stage in the Ranger game, Jack knows his character inside and out. It would have been easy to put up a strong-but-flawed Ranger and let the story flow around him, and yet, Jack let his characters stumble and fall – let them make choices and grow, and in doing so, draw the reader that much deeper into the story and the characters. It gave a fun, post-apocalyptic zombie romp a much-appreciated nuance, and stands as a poignant and lovely final chapter in the Ranger Martin series.

Ultimately, it was a joy to read – and you can get your hands on a copy tomorrow, October 20! Check out Jack’s site for more information and wander on down to Amazon to get your hands on the other two books in the Ranger Martin series.

Ranger Martin and the Zombie Apocalypse

Ranger Martin and the Alien Invasion

his review was based on the digital ARC, provided by the author.

From the Author… Ranger Martin and the Search for Paradise

There is no cure. The change is permanent. Whoever says they can fix this is wrong. Months ago, billions of people died in the zombie apocalypse. The survivors either have become refugees looking for a way out or have turned against each other. No one will admit they killed their friend for a package of raisins. It happens though, and there isn’t anything anyone can do about it.

That is, until now.

When the military lays siege on his silo, Ranger and his crack team of professionals—a bunch of kids, really—have no other choice than to run. But after he discovers a map that may lead to a mythic city called Paradise, where neither army nor zombie can invade, Ranger mounts a cross-state journey to find the place of safety before the others find him and it’s too late.

Flacco and his family live in Ontario, Canada. When he is not writing, he volunteers his time. Past work includes acting in youth theater outreach for nursing homes, ushering at his church, and getting involved with scouts. Supporting his wife, she served on the leadership council for the local home education network and on the library advisory board responsible for the purchase of new books for children and young adults.

Jack and his wife currently contribute to a wide variety of charitable organizations. Holding dear the importance of universal literacy, they donate books to individual families in need.

4 thoughts on “Reviewed: Ranger Martin and the Search for Paradise”